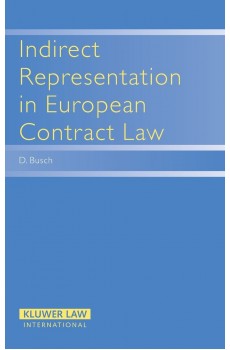 Over the last few years increasing attention continues to be paid to the Principles of European Contract Law (otherwise known as the Principles, the Lando Principles or PECL). The drafters of the Principles presented their work in the form of articles accompanied by explanatory notes, averring that the main purpose of the instrument is to serve as a basis for a future European contract law. Can the Lando Principles, as their drafters claim, indeed offer an acceptable basis for a future European contract law? Dr. Busch, both scholar and practitioner, offers a detailed analysis, in response to this question, of the contractual aspects of indirect representation (Arts. 3:301-304 PECL). He evaluates these provisions in the light of Dutch, German, and English law, as well as with reference to the Geneva Convention on Agency in the International Sale of Goods.

To introduce this important comparative study and make the background as complete as possible, this book devotes separate chapters to thorough discussions of indirect representation in Dutch law (middellijke vertegenwoordiging Arts. 7:419-421 Dutch Civil Code), in German law (mittelbare Stellvertretung) and in the English doctrine of the undisclosed principal. Lawyers in Europe and elsewhere who must deal with contract law in any connection, will find this thoroughly researched and well-thought-out text to be indispensable. Its value as a scholarly analysis can only grow with the coming years.

D. Busch (b. 1974) graduated (cum laude) in Dutch law from the University of Utrecht in 1997. He attained the title of Magister Juris in European and Comparative Law at the University of Oxford (St. John's College) in 1998, and defended his dissertation in 2002 at the University of Utrecht. Until the end of 2001 he was attached as lecturer and researcher to the Molengraaff Institute of Private Law in Utrecht. Since 2002 he has worked as an attorney-at-law for the law office of De Brauw Blackstone Westbroek in Amsterdam. He has also been an honorary senior lecturer at the Molengraaff Institute since 2004. Principles of European Contract Law 3