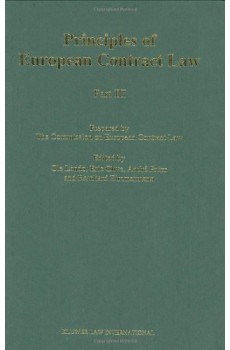 Parts I and II were published in 2000 and have attracted great interest and acclaim and a growing volume of secondary literature. The present volume follows the same pattern, a set of proposed Articles drawn up by the Commission, followed by comments and national notes containing a wealth of comparative law. The subjects dealt with in Part III are: plurality of debtors and creditors, assignment, substitution of new debtor and transfer of contract, set-off, prescription, illegality, conditions and capitalization of interest.

No self-respecting contract lawyer in Europe can afford to ignore the Lando Principles. They are not only a useful and convenient source of information about current laws in the countries of the European Union but also a possible blueprint for the contract part of a future European civil code. They are a touchstone against which any discussion of contract law can be tested.

The book will be particularly useful to those engaged in arbitrations with and international element, to those concerned with comparative law, and to those interested in the development of legal policy on contract law at national, European or international level.