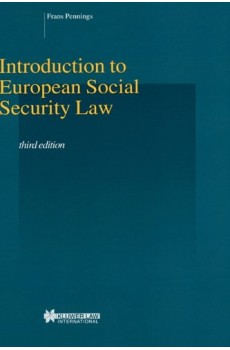 The social security law of the European Union (EU) has become of vital significance to persons living or working in EU Member States. The creation of the European Economic Area and the start of the task of accession of the candidate Members (Eastern European countries) has further increased its impact.

This book describes EU social security law, beginning with the rules relevant to migrant workers. Coverage includes Regulations 1408/71 and 574/72 and the case law of the Court of Justice of the EC. The book analyses the contributions of these judgements to the development of coordination law and to the realisation of the objective of free movement of workers.

The second part of the book focuses on harmonisation initiatives, both generally and in the context of specific areas of development. The law on equal treatment of men and women is a particularly active part of EU social security law. The Court of Justice has issued several main decisions on the subject (the Barber and Kohll and Decker judgments, for example). This book enables the reader to understand the recent developments and to grasp the present state of law.

A separate chapter analyses the fight against poverty as an objective of EU social security law and the instruments developed for this purpose.

This is the completely revised and updated third edition of this authoritative work.